Canine elbow dysplasia (ED) is a disease of the elbows of dogs caused by growth disturbances in the elbow joint.  There are a number of theories as to the exact cause of the disease that includes defects in cartilage growth, trauma, genetics, exercise, diet, and so on. It is likely that a combination of these factors leads to a mismatch of growth between the two bones in the foreleg located between the elbow and the wrist (radius and ulna). If the radius grows more slowly than the ulna it becomes shorter leading to increased pressure on the medial coronoid process of the ulna (Figure 1). This in turn can cause damage to the cartilage in the joint and even fracture of the tip of the coronoid process, which damages the medial compartment (side closest to the body) of the joint. Less commonly, if the ulna grows too slowly then the radius pushes the upper arm bone (humerus) against the anconeal process, which can then lead to failure of the anconeal process to attach to the ulna at maturity. It is believed that the mismatch in growth between the radius and ulna may sometimes only occur during a puppy’s growth, but it may also persist when the pup has finished growing. 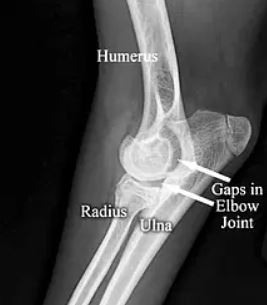 Elbow dysplasia is most often seen in large to giant breed dogs, particularly Labradors, Golden Retrievers, German Shepherds, and Rottweilers, but can occur in most breeds of dog. Different breeds have predispositions to various forms of the disease, so that ununited anconeal process (UAP) is largely a problem of German Shepherds, medial compartment disease (medial coronoid injury) is seen in many other breeds and sighthounds are free of the disease.

Unfortunately once the elbow joint has been damaged through either cartilage loss, the presence of medial coronoid fragments or an ununited anconeal process, a vicious circle of inflammation and further cartilage damage begins. Ultimately this causes progressive arthritis of the elbow joint leading to pain and loss of function.

Dogs affected by elbow dysplasia often show signs from an early age, typically from 5 months on, but some may first be diagnosed after 4–6 years. Affected dogs develop a front limb lameness that typically worsens over a period of weeks to months. Lameness is usually worse after exercise and typically never completely resolves with rest. Often both forelegs are affected, which can make detection of lameness difficult, as the gait is not asymmetric. When both elbows are involved the dog usually becomes unwilling to exercise for long periods or may even refuse to complete a walk.